The FairladyZ 432 - 4 Valves per cylinder, 3 Carburettors and 2 Overhead Camshafts.

The Purpose of this page is to give the reader a general idea of what the FairladyZ 432 and FairladyZ 432R models were.

Note 1:The "R" or Racing model of the 432 is lighter weight, and it could be ordered with several combinations of transmission ratios and rearend ratios. The "lightened" version was built on the base Fairlady Z (Model S30S) which lacked some of the carpeting and sound proofing found on the Fairlady Z-L" or Luxury model (Model S30). Additionally the R model was equipped with a fiberglass front apron and hood, plexiglass side and rear windows, light weight bucket seats with the drivers side equipped with four point harness. There was no Clock nor heater in the R Model - however it did get the fiberglass rear spoiler. A fiberglass cover was used under the engine and transmission, while heaver gauge sheetmetal was used in high stress areas of the unit-body (suspension mounting points). Lighter gauge sheetmetal was used in other areas of the body for additional weight savings.

The R Model left the factory with the 4.5 inch steel wheels - as it was assumed that the racing teams would want to select and use their own wheel / tire combinations. The expensive Mag. wheels were standard on the 432 (not the 432 R )

Note 2: Mr. Matsuo tells us that in Aug. of 1967 he expressed his concerned that due to the high tax on engines over 2.0L displacement not many Z's could be sold in Japan. At that point his management told him to use the S20 engine from Prince, and thus the Z 432 was incidentally created. The S20 was used in the Prince Skyline GTR and R380 race car.

Note 4: Four FairladyZ 432's were purchased by the Japanese Police Force, and used for high speed pursuit on the Chuo Expressway in Tokyo - According to Brian Long.

Click Here To See The Pictures As Published in 1971 Road & Track - This article says that it was the Tokyo Municipal Police. However the Police in Japan operate on a National level, so to be clear R&T should have written "for use by the Japanese Police in Tokyo and the municipal area. 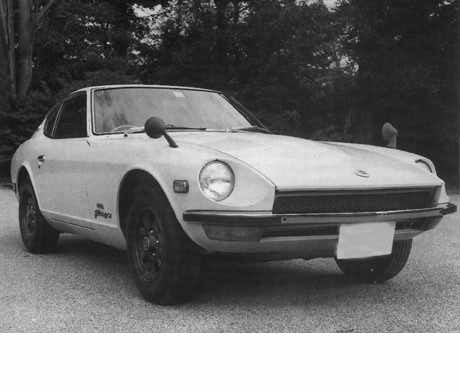 The rear-view mirrors mounted on the front fenders were required in the Home Market in Japan. The FairladyZ 432 also had a special grill. The marking on the front fender, shown in a poor enlargement herein linked - say "432" and under that "FairladyZ". This will at least give you and idea of the general outline and placement of the name plates. Sorry about the quality of the enlargement, but I thought something to give you the idea, would be better than nothing.

Note Too that the home market FairladyZ's had additional rubber mounts on the rear bumpers. You will also note that you can see the special rear muffler with dual outlets when you view the rear bumper.

Mag Wheels were an option on the Fairlady 432 and 432-R. Steel wheels were also used. Here again - is a very poor quality blow up of the wheels on this car - it is intended only to show you the style or look of the wheel. View Wheel Close Up

Pictured Below: - this view gives you a good idea of what the engine looks like - note the tube headers. Pictured Below: - this view gives you a good idea of what the engine looks like also - note the Three Carb set-up. 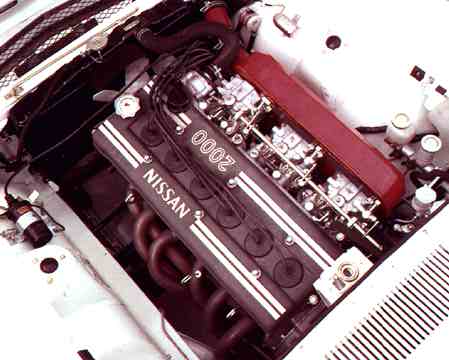