The Purpose of this page is to share the informaton that I have gathered related to the Design Prototypes known as the MID4s. This design exercise contributed to the evolution of the Z Car in general and directly to the development of the 1990 Z32 - 300ZX. The MID4 and the MID4-II which followed it, should both be viewed as a styling exercise and a working prototype, used to test various technological advancements for Nissan in general, as well as the Z Car line.

The NISSAN MID 4 was first unveiled in the Frankfurt Auto Show , September 1985.

The MID 4 was intended to show the world what Nissan could do with their technologies focused on the development of advanced automotive designs.

The first car, (because at least two were manufactured) was a pearl white, left-hand drive model - pictured above. The second car produced - pictured below was red. The car was mid-rear engined, and had the 3 liter , V-6 (VG30)engine of the Z31 - Fairlady Z/300ZX , except with four cams , 24 valves and a power of 230hp @6000r.p.m. This evolution was later introduced in the domestic (Japan) `86 Fairlady 300ZR , producing a quite good performer .

But that wasn't the most impressive thing. The car was four-wheel-drive, dividing the power transmitted 33% to the front and 67% to the rear, with the aim to achieve good balance and road behavior at speed. This system was the first development of the following ATESSA - Nissan's 4WD system, adopted later for production models such as the Skyline, the Bluebird, the Cefiro, and some others.

The first MID 4 also had the "first stage" HICAS four-wheel-steering system, that looked for a better lateral roadholding, taking on account the lateral acceleration and the pass-through bends speed. This system, was adopted, once reworked, in the Z32 Fairlady-Z/ 90+300ZX, and middle /top Nissan's coupe and sedan ranges.

Finally, the car had four disk brakes with an antilock break system, and the bodywork was designed to be aerodynamically efficient. A bit of the MID-4 style influence, was seen in the `86 restyling of the Z31.

The second car:, the red one pictured in this article, with right-hand drive, I believe must have been shown at the `85 Tokio Motor Show, in October.

October, 1987 Tokio Motor Show: Nissan introduced to the public a dream car they called the MID4-II, following the main points of the previous one, but this time in a shape that one could think it was ready to be released to the market. The bodywork, was even more beautiful than the 1985's, with a soft mixture between the Porsche 959, the Ferrari Testarossa, and their own Nissan styling, very nice and balanced. This car was tested on a track of the U.S. and demonistrated immediately its advanced qualities.

When It Introduced The MID4-II In 1987: Nissan knew that this evolution would take a bit longer to refine, and the 1987 Z31 300ZX was the beginning of the change. The Japanese maker began to put in practice all the technology available for them in the form of prototypes, in order not only to amaze the public with the electronics technology they had, but additionally for the purpose of putting them under test conditions. So that they could be used later in production models. That was the main principle in the MID4 prototypes, the technological "key" for Nissan's aspirations of building an outstanding sports car.

The engine was basically the same as the one the Z32 300ZX would use in 1990, but having 330hp. thanks to a pair of turbos and their intercoolers. The suspensions were directly used in the 90 Fairlady-Z, but not the complex 4WD system, developed with the help of the Austrian producer Steyr-Daimler-Puch. 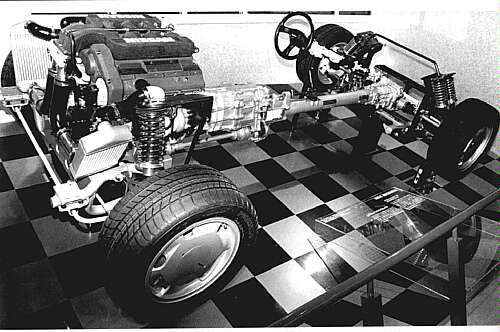 Pictured above is the chassis for the 1987 MID4-II - note the twin turbos with intercoolers! (330hp with all wheel drive!).

Nissan management thought that the new Z32 with good tires and suspensions would have good enough roadholding without that all wheel drive system. Of course they considered putting it on the car, however the weight would increase and exterior design would be changed, resulting in rising the car about 2 inches (5 cms.) while changing the line of the hood. So the lucky car that got the system was the Skyline GT-R, a sports car icon in Japan.

Nissan had its doubts weather making the MID4 or not, being the successor of the Z31, but finally they considered that it was too expensive to build. Curiously, three years later, as it happened with original Z's development, Nissan recovered their interest in the project, but this time they were considering making a Supercar, powered with the Infiniti's 4.5L V8, although that is another story ( I even have spy photos of the test mules).

Returning with the 1987 MID4-II, at least three prototypes were built, one ivory white (shown in the Tokio Show), one medium metallic red , and another in titanium metallic gray used for track testing. All of them were left hand drive. I don't have many more details, but I suppose that the car had many electronic gadgets. As a detail, the man responsible for the MID4-II project was Takoya Noguchi.

Hope this gives you some insites and information related to the evoluation of the design of the Z Cars and a better picture of the MID4 Prototypes their applications and uses. Jose.