You Can Not Get There From Here

Nope - Can't Be Done!.
If an engineering and design effort starts with a previous foundation and is given only a year or two - they simply can not evolve the Nissan 2000GT (show above) into the Datsun 240-Z. Nope, can't be done. You can't simply can't get there from here.

On The Other Hand
If a product design and engineering effort starts with a clearly defined set of customer requirements, manufacturing requirements, Federal Safety and Emissions Standards, and utilizes the design methods, engineering processes, design tools etc. that they used on the last project they did - yes, within a year or two they can come up with something like the Datsun 240-Z. I believe that is exactly what happened in this case.

The Datsun 240-Z was not the result of a further evolution, nor further refinement of the Fairlady line, which is what the Nissan 2000GT was. That evolution came to an end with the "Goertz" design effort when Nissan cancelled the Joint Nissan 2000GT / Yamaha A550X Project in June of 1964. (Goertz left Nissan's employ in Oct. of 1964).

Rather the Datsun 240-Z came about as the result of a major reorganization of Nissan's Design Department, with the assignment of a new head of the Sports Car Design Section, Mr. Matsuo . Given specific customer requirements defined and delivered from the US; combined with the Engineering experience and technology merged into Nissan Motors with the acquisition of the Prince Motor Company in 1966. The first output of the this Design Department reorganization was the design of the PL510 in the Sedan Section, and that was followed closely by the design of the Datsun 240-Z in the Sports Car Design Studio. Both Sedan and Sports Car finely tuned for the American Market, both heavily influenced by Mr. K and both were huge sales successes for Datsun.

Pictured on the Left below: is the Triumph GT6 Mk1. Originally designed by Michellotti in 1963 as the Spitfire GT it was further refined and released for production as the Triumph GT6, in July of 1966.

Pictured below the GT6 is a full size clay model of the Nissan 2000GT, which represents the Goertz design, and then below that the metal prototype built by Yamaha of the 2000GT. The 2000GT was done on the Joint Development Project between Yamaha and Nissan Motors in 1964. This is referred to as the "Goertz Design" and it was an evolution of the previous Fairlady roadsters. The design was based on the roadster chassis, with a 4 cylinder engine etc..

Pictured on the Right below: is the Ferrari 275GTB and below that is the Clay Model #AV-V (AV plus Roman Numeral Five) from 1966 of the design developed in-house by the Nissan Design Staff. This was to be farther developed into what was to become the Datsun 240-Z, show last. Here again we can see a lot of the original designers styling - but the original designer in this case was Pininfarina's work on the Ferrari 275GTB, first shown at the Paris Auto Show at the end of 1964.

Other than the fact that the "Nissan 2000GT" and the "240-Z", as well as the examples and clay models leading to them, are all fastback coupes (like twenty or more before them from other manufacturers) a critical review of both the "Styling Signatures" and the "Engineering Design" shows clearly that the GT6/Goertz effort is completely different than the 275GTB/Nissan design.

The Table Below Compares The Main Styling and Engineering Features of the Nissan 2000GT and the later Nissan Design Team's 240-Z.

Who should be credited - with having the greatest "influence" on the Styling and Design of what was to become the DATSUN 240-Z? Michellotti & Goertz or Pininfarina & Mr. Matsuo? I don't believe that there is any question about the answer to that.

Where are the real design and engineering roots of the 240-Z? In the previous line of Nissan roadsters or in the Prince Motor Company, the Nissan Design Department and the Datsun PL510. I don't believe that there is any question about the answer to that either.

Do we believe the truth when we find it? or stick with the Myth started in 74? I don't believe the Myth... They just couldn't have got there that way... you simply could not make a silk purse out of a sows ear.

So What Then Is This? 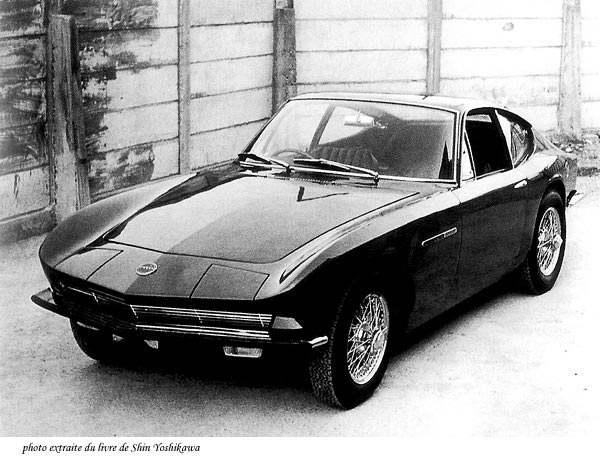 Pictured Above: According to Mr. Shin Yoshikawa, a noted Automotive Artists and Author of the Book "TOYOTA 2000 GT", this is the Yamaha A550X shown in Yamaha's Private Courtyard. This prototype was powered by the Yamaha 2.0L 4 cylinder engine.

It would appear to be the continued refinement by Yamaha of the Joint Nissan 2000GT/Yamaha A550X Development Project. Shown here in Black as of Dec. 1964, it was built as a fiberglass prototype and first painted white. Other pictures of this prototype have been circulated, but no documentation as to the date it was finished has been found so far.

According to Mr. Yoshikawa, Yamaha used this prototype to demonstrate their Design and Rapid Prototype Build capabilities to perspective clients of their Yamaha Design Center.

Speaking Of The 63 Corvette
Perhaps we should credit the initial concept for the Nissan 2000GT and then the Yamaha A550X not to Mr. Goertz, who seemed to copy the Sting Ray design extensively, but rather the Bill Mitchell at GM and his team. Interesting to note that Mr. Peter Brock was a member of that team.